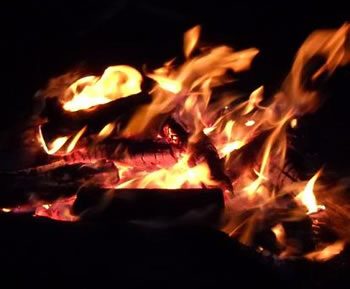 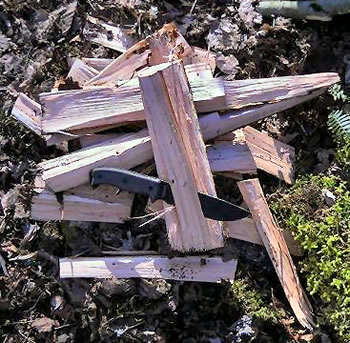 As someone who hikes and camps deep in the mountainous terrain of British Columbia, I need tools that are light weight, packable, and most importantly, reliable. In this case, I needed something I could split firewood and build shelters with. Though I usually favour an axe for these kinds of tasks, I find that they're too large and heavy to pack on a longer, more difficult hike. So I decided a quality camp knife would be the way to go, offering more versatility than an axe does, but at a smaller weight and size.

I chose the RAT Cutlery RC-6 (now known as the ESEE-6) for the job. The drop-point style blade offers a strong tip with plenty of belly to work with, and the 5.75" cutting edge is more than enough for most tasks. Built with powder coated 1095 carbon steel, it will take all the abuse you can throw at it, and then some. The only downside to this is a lack of rust resistance when compared to stainless steel, but if you simply wipe the blade off after use then clean it when you get home, rust will never be an issue. The superior strength of carbon steel far outweighs any concern I have with rust.

I took the blade out on a quick overnight hike to see what it was capable of, and I must say I'm very pleased with it. The first thing I noticed was during the hike itself: the sheathing system is fantastic. It is small, compact, and very minimalistic - just what I wanted. The molded plastic sheath retains the knife via friction, and does an exceptional job at it. I tried and tried to shake the knife out of the sheath, and it just wasn't happening. The sheath comes with two attachment options. The first is a set of plastic locks; I found these very useful for clipping the knife to a pack, but not so useful for belt carry, because it rode too high on the waist. The second option was a length of paracord and a cord lock; I favoured this for belt carry and overall simplicity of use.

Upon reaching my camp, I began limbing some dead fall that would be used as firewood. I was immediately surprised by how well the ESEE-6 sliced through the branches; it went through most with just one swing. The full flat grind blade style seems to work very well in slicing tasks. Next I did some light chopping. Again I was surprised; a knife this size is too small to bring significant momentum into swings, yet it was still chopping out relatively large chunks of wood. Finally I moved on to a real test: batoning. This is where I feel the knife shines - it is ideally shaped for splitting wood in this fashion, acting similarly to a splitting wedge. I batoned through log after log, and even through some tough knots, with little effort. I soon had a beautiful camp fire to cook on and fall asleep beside.

Overall, I am very satisfied with the product. It is the right size and shape to be a "jack of all trades," and it is built to last. If I could only carry one item into the woods to survive with, it would be this knife. The only weak point I could find was that it rides somewhat high during belt carry - a very minor issue. ESEE knives have always had a good reputation, and now that I own one, I understand why. This product will not disappoint.