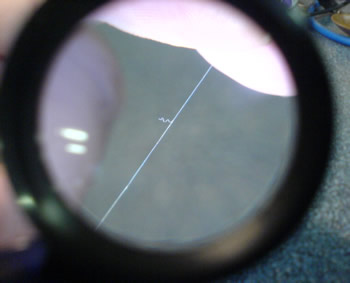 My Fällkniven F1/3G arrived today from Paul at Workwear Canada, and I immediately felt privileged to own this fine piece of Swedish craftsmanship. It arrived razor sharp, literally able to carve tiny slices from a human hair. The overall build quality is excellent, and has the feel of a knife that will last a lifetime.

The F1 design has been around since at least 1995, where it became the standard issued survival knife to the Swedish Air Force. Fällkniven originally built a limited number of the F1 design knives with a new type of powder steel and made some available for public consumption. The public responded very well, and have been asking for this knife ever since.

For Fällknivens 25th anniversary, they have answered the public and built a limited run of 1000 of these 3G laminated powder steel based F1 knives. The F1 comes in many configurations, but the limited 3G model comes with a shiny blade only. The 3G itself is wrapped in 420J2 steel, giving it an extremely hard and durable cutting edge, while retaining the toughness of the 420J2, making this a very strong blade that holds an edge almost second to none.

This laminated steel process is similar to the way high quality samurai swords are designed, with a very hard steel wrapped in a softer toughersteel for great strength and cutting power. The blade itself is engraved on the spine near the handle with a number out of 1000, marking its place in the batch of F1/3G knives. The blade also has the Fällkniven logo on the side, with a crown on each side of the logo, signifying the 25th anniversary 3G limited run. The spine of the 4.50 mm clip point tapered blade is ground flat, which makes it perfect for striking a ferrocerium rod or fire steel, further making this knife great for survival purposes. The full tang design has the tang exposed at the base of the handle, allowing for some light hammering jobs to be done as well.

The F1/3G like the other F1 models, comes with a choice of leather sheath or zytel sheath. I chose the leather sheath and am very pleased. The quality is good, and the fit is exceptional. The sheath covers the entire knife, with a flap over the top secured with a snap. The fit however is such that the knife will not come loose from the sheath, even if held upside down and shaken very hard with the flap open. The sheath has a belt loop which is fixed, so it must be threaded onto your belt rather than just clipping it off and on. The handle is a synthetic black thermorunpolymer. It is quite strong, and very comfortable in your hand with its positive checkering.

My first forays with my F1/3G began by testing the edge by shaving some hair off. Most new knives are able to do this, but the F1/3G shaved on par with a real razor blade. Words can hardly express the extreme sharpness of this blade, right out of the box (which has a warning printed on it, along with sharpening instructions). I own other high quality knives, and none of them compare to the F1/3Gs edge. I proceeded to split a couple 2x4s that were lying around due to some renovations. The smooth wedge shaped blade easily split the wood along the grain, with very minimal force using another 2x4 to baton it through. I also split some small diameter hickory and birch logs that evening in the same manner. *After* splitting these logs and 2x4s, I tried and succeeded at literally splitting hairs. I was able to slice small curls from a human hair, to the amazement of myself and coworkers.

The originally intended purpose of the F1 was to be a light (150g), strong survival knife for the Swedish military. It has proven its quality in this role, but this knife is equally at home in the kitchen or in the field. I would think no more of splitting a log with this knife, than slicing an onion or some celery. The fine edge and strength of the laminated 3G steel make this knife great for almost any purpose.

Having only owned this knife a short time, I have not yet had to sharpen it, which also speaks to its good edge retention. In my opinion this knife stands above the pack, in a world of high quality knives, this is the best knife I have ever owned, and likely will ever own. I fully intend to make Fällkniven my knife of choice from now on. I wholeheartedly recommend the F1/3G knife to anyone who needs to depend on their knife being ready when they need it, and Workwear Canada for its great prices and customer service.