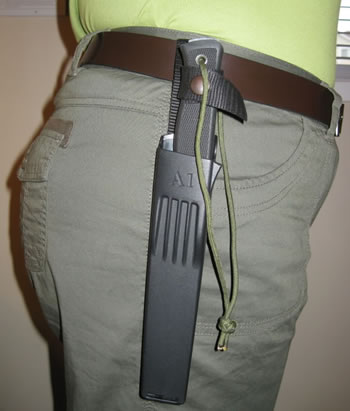 Women have enjoyed the out of doors for a long long time.

Now with the popularization of bushcraft by TV hosts (and we all know who I'm talking about), we can expect not only a surge in interest in primitive skills from both genders, but also as more men are interested in the topics a secondary wave of female presence in the forests will appear as the men look to bring their life's companions with them.

Whether you are a woman looking for more comfortable or functional gear, or a caring boyfriend/ male friend looking to equip your party with the best equipment out there you'll be pleased with an increasing amount of offerings from mainstream outfitters.

Gregory with their women targeted backpacks, extra padded hip belts and curvy shoulder straps included. Mountain Hardware with their flamboyant pastel colored clothing. My favorite pair of hiking boots is by Scarpa, and lo and behold when I last went to MEC was there not a pair of Scarpa leather boots – for women. … But what about knife carry?

Your choice of sheath is just as important as your choice of the blade you'll take. Your sheath should be able to protect your knife when not in use, and keep it handy for when you need it. It should be out of the way, and prevent your knife from becoming separated from you.

Kayaking is an example of a wilderness sport that embodies these requirements (in addition to others of course). If you get in trouble you're talking about a high likelyhood of becoming separated from whatever gear you have stored in the boat. Now you're talking a PSK (or Personal survival kit) consisting of at least a knife and a fire starting implement on you all the time. Where would you carry your knife when kayaking? You don't want it to rattle, or get in the way of your lifejacket. You want it where it is easy to access should you take a dip and, I don't know, get tangled in some weeds. You do NOT want it to fall out to be forever lost in the river. See what I mean about the choice of carry?

Naturally there are a variety of sheath designs out there… Are any more comfortable or reliable for women? Is there even a difference?

I say that there is, but then again this "review" of sorts is written from a guy's perspective. Women have a very different body construction than we do, which is why they do some things in certain ways that may seem "strange" to us.

Doing a day hike recently I got my girlfriend to pack out an EKA Nordic W11 (review to come). Results were interesting… aka she hated it.

First of all making my girlfriend wear a belt was an issue: apparently it's not "comfortable" enough… I'll let that be. Secondly she has (as many women out there) an hour glass figure – so when you strap a rigid sheath to the hip, or just above the hips that means that the sheath itself sticks out like a sore thumb. This naturally gets caught on any branches, or brush or debris.

What does she prefer then? Here are 2 different benchmark styles in way of comparison, because those are some that she found more comfortable. It just so happens that they are both Fallknivens…

Here we have a Fallkniven A1…. The flexible nylon belt loop means that the weight of the knife hanging down from the belt makes the handle (topside) stick out a little. For those good in geometry, it's like a tangent to a circle.

She liked that, but said the biggest asset in this method of carry was the weight of the knife keeping it steady, and said that for her a knife rolling forward and backward was an issue. In my personal experience of carry I'll have the knife either slightly ahead or behind of the actual Trochanter (scientific term for the pokey part on the outside of your hip), this meant that my knife was usually bumped just a little during extension and flexion of the hip. For me that's just a little reminder that my blade is there, and that I haven't lost it, but for her the movement became much more significant, which is why she chose direct side carry.

As a side note: Fallkniven Zytel sheaths have the ability to be retained to the leg with a lanyard passing through the bottom of the sheath and around the leg. This reduces tip movement, and solved that particular issue with her. This speaks to the importance of customizing the fit of your sheath to you.

Ok, another data point about "the weight of the knife keeps it steady"… Here we have in the same configuration a Fallkniven F1.

True to form and reputation as a "low impact" knife to carry, perfect for pilots in tight quarters, the F1 didn't stick out, and didn't move around too much while walking… Or running for that matter. So I guess regarding Fallkniven, if you've got a heavy knife the weight helps keep it steady but if you're packing a light knife steadiness isn't an issue either? At this point I shrug and take it as a data point – at least the pictures give you an idea. Here you have an S1, using the leather dangler sheath. The image speaks for itself.

Dangler sheaths are a Scandinavian contribution, where the belt loop is actually a loop of material connected to the actual knife sheath. This leaves freedom for the knife to swing… and yet in my experience it doesn't swing as much as conforms to your body.

Here you see me after a recent Algonquin hike (which is why I look beaten up and all my pack straps are loose). By focusing on the waist straps you'll find that the S1 (in the leather dangler) hangs below my pack's hip strap. If I were to wear a sheath that kept the knife's handle right at my belt (ref the previous A1, F1 and W11 pictures) the pack's straps would lie over the knife. Making it uncomfortable and difficult to access. "why don't you put your knife on your pack when you're hiking, and wear it on your belt when you get to camp?" Totally possible… and sometimes *rarely* I do. However I like to be consistent in the woods, so I always put my gear in the same place. Like that I can access it at night when I can't see… What If I end up separated from my bag? Or if I make to strike camp, forget to put my blade on my belt, and get lost say… on the way back from the loo? Perhaps you may not like the fallkniven leather dangler sheaths… Leather is not for all environments either. My point is consider the knife carry system when you're buying the blade. Something I've been toying with is turning the zytel sheaths into dangler sheaths. Simply make a loop of nylon and cord it together with the existing belt loop… not hard at all. Getting a bit sidetracked here: the topic was women specific knife carry options. So my female colleagues at work, home and play generally don't love belts.

What I've seen instead done quite often is:

I have not seen a lot of women belt carrying knives – but were I to make a recommendation I would suggest to avoid stiff sheaths that don't move with you. Perhaps consider a scandi style dangler, or tying the bottom of a sheath to your leg. (very loosely, the cord increases friction between the sheath and your trousers which means more movement with you.) Or consider the ESEE knives, for their wide range in carry options and lashing points.